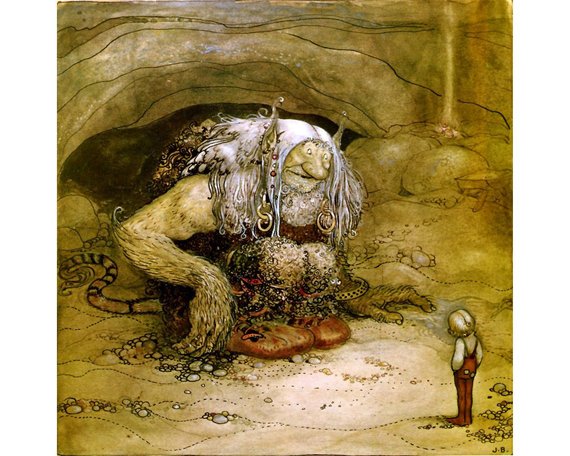 Can we pierce the armor of the climate dragon. Is there one last black arrow that Bard of Lake town can penetrate the dragons scale. Or will the Targaryan dragons melt the wall of ice and the Shire and New York will end up under water?

History is not scripted in Hollywood.

Do you remember the scene in that Hollywood movie where one guy goes panic and screams ”we are not going to make it – its no use… we are all going to die”. The bigger group listens and gets very scared because they have similar thoughts about the situation. The screaming person understands the odds and is being quite realistic about the situation and their chances to get out alive.

But here emerges the hero. The hero is not going to panic or give up. The hero goes up and just bangs a heavy piece of wood in the head of the screaming man who falls unconscious. And the heroic music starts and the hero holds that speech to the group: ”we will fight”. And AGAINST ALL ODDS most of the group gets out alive. Just as Aragorn before the last battle in front of the black gates holds his hero speech. ”I see in your eyes a fear that takes the heart out of me… today we fight”, and they go on being saved by heroism and belief… against all odds.

These things happen in movies, but not so often in real life. History is not scripted in Hollywood.

History of Homo sapiens is no story of happy endings.

In history cities are eradicated, man woman and child. Ethnic cleansing more or less successful. Women raped en-masse. Huge populations starve to death. Millions die by disease. Violent conflicts kill of half the populations. Nature catastrophes destroy cities and infants die. Climate (or environment) has changed in history and some humans has adapted, but half die out or are driven into exodus. This is how evolution works. Voices and cultures just disappear in a cloud of smoke or in a long painful decline. Competition and greed and conflict is a factor that has been with humans since before  ”we left the trees”. Modern society can not educate the genetic drive.

But eventually Homo sapiens will die out, ALL species dies sooner or later. Which is no tragedy, since each and every one of us personally also dies… only once.

The future is of secondary concern to us, we are alive right now. Yours and mine concern is our life right now and its quality and length. And I can assure you, both its quality and length is severely threatened. It is time for some hero-shit. The white walkers are coming. Lead by some nasty horsemen; peak-oil and climate change and over population and a capitalism industrialized consumption of non renewable resources. The biggest dragons humanity ever faced.

Will the hero slay the dragon?

The transition movement and the environmentalists are aspiring to be the heroes of our time. The panicked, but realistic screaming man is a “doomer”. A person that lost hope and has chosen apathy. So are the “environmentalists” the real heroes? It depends on if they will save us or not. Fact is, the doomer has also a part to play. Someone has to cry wolf in this fairy tale of ours, even though it may not look like a wolf. The monster is more abstract, may be delayed and can change shape as in any good horror movie. People are pointing at all kinds of dragons on the horizon, mainly three: economy, ecology and energy. It will be hard for the hero to choose which one to fight first, and what if its true, that this Hydra will grow two heads for each action the hero takes.

The council of the round table
There are other roles to claim in this fairy tale of ours. We look to the divine scientists to give us some magical tool so that we can fight the dragon.

The heroes of our time will not only need weapons to fight the dragon, they will need maps and knowledge. They will have to solve the riddle posed to them in order to be let over the bridge and on to their quest. Action must be driven by knowledge. A council of ”wise old men” has been formed that calls out to the hero with knowledge that may solve the riddle and empower the hero. The council of the IPCC has gathered to understand and face the nature of the dragon. Can we pierce the armor of the dragon. Is there one last black arrow that Bard of Lake town can penetrate the dragons scale. Or will the Targaryan dragons melt the wall of ice and the Shire and New York will end up under water?

The princess and half the kingdom

The predominant hero-strategy is based on an idea that technology and electrics will save the prosperous kingdom. The hero puts his/her hopes in the delivery of a magical weapon. The hero is already dreaming about a green prosperous world after the battle.

The sage, the collpsologist, is needed so that the heroes of this world fully understands the nature of the dragon and which dragon to fight first. There are many false heroes and wanna-be sages that are prematurely busy imagining how to organize half the kingdom that is imagined to be inherited and dreaming about the marriage with the princess.
The Collapsology sage says, there is not going to be any bloody castle and no wedding, because there is no ingredients left for the wedding cake, and the bloody princes must cast that silly dress of and grab a weapon and get bloody. She may not have time to produce any princesses and do any interior design in the nursery room.

The heroes of today do not want to cross all the bridges and do not want to descend into the deepest dungeon and fight the ultimate dragon. They are not ready for the sacrifice of Gandalf taking on the Balrog and actually loose something and return as another person. A successful hero needs to let go of their previous identity and become something else. There is a painful sacrifice involved. But the needed heroes of our story want to stay home behind a screen and wait for a golden sword to be delivered. Or be happy prepping in their little hobbit hole, hoping the forces of Sauron will not find them.

This one doom that interlinks our fate

For the first time in history one culture connects the whole world and humans are everywhere. We are bond to one narrative. As Elrond said: Each race is bound to this fate – this one doom. Thus our fate are interlinked. Global trade and oil has built this civilization. Global trade and oil maintains this world as we know it. As our nature and ecosystems will provide with less resources, as new energy sources will prove not to be as easy to use as oil – then our energy flows will be disrupted and economy and trade will be disrupted. This is the dark force facing this civilization.

A complex civilization as an empire based on entangled network of economy and energy will rise and fall as one. And when it falls then big scale industry will fall with it. And then there will be no more “things” to leisurely consume for the broader majority.

Leaving the sinking ship is hard. Where to go. Do we follow “the piper”? Who is leading us? There is no wilderness to immigrate to. There are people everywhere. We can not sail west to conquer for more resources.

Sooner or later the economy will have to do a major reboot, and capitalism may well start all over. Economy will crash either by its own design or by lack of resources and energy, or both. During the down time all environmental work will be seen as luxury and will not be funded.
Question is, what comes after. What world must we prepare for? Should we look at the hero Hari Seldon in the foundation books of Asimov. The one where he started preparing a new system in secrecy already before the empire crumbled.

The golden sword of technology

In the legend of King Arthur the young Arthur yet to be king and hero takes on the challenge of drawing the sword from the stone. Since he is the chosen one, he succeeds and gains this weapon (tool) that will help him in his quest to save the kingdom and create civilization and peace.

What sword or tool does the hero of our story need to save humanity? CCS technology? An army of windmills? A mine of mithril with which she can create the magical solar panels.

Technology is a two edged sword. Just like the ring in Lord of the rings, it gives people power, but with it comes consequences. Technology can pollute our world and our mind. Technology may not save us, believing it will, is putting all eggs in one basket.

Who will take the challenge and become the true hero?

The hero is the one that reluctantly changes, sacrifices something. Aragorn put his life at stake as he ventured into the halls of the dead and came out a king on the other side. Gandalf died and came back. But most of us will be Boromir, paying the price for too much greed.

Are you the chosen one?
Every story needs a chosen one that reluctantly shoulders the role of hero. A person that canalizes the hope of the whole group. A person that dare to challenge the traditions and take their own methods in restoring peace and order. The chosen one may be called Luke Skywalker, Neo, or Greta Thunberg.

Are you ready to be the little boy in the Dutch fairy tale, where he saved the whole village from flooding by putting his thumb in the crack of the wall and slept there shivering cold all night and stopped the crack from opening and the water to flood through. Are you willing to be Odysseus and leave your home and not even be recognized by your own tribe. Are you willing to join the nights watch?

What pleasures, comfort or attitude are you wiling to sacrifice to become the hero. Part of you will have to die, to become something else. The old ways will have to go. The ones that hold on, will die.

1 thought on “Will you be the hero in this fairy tale?”